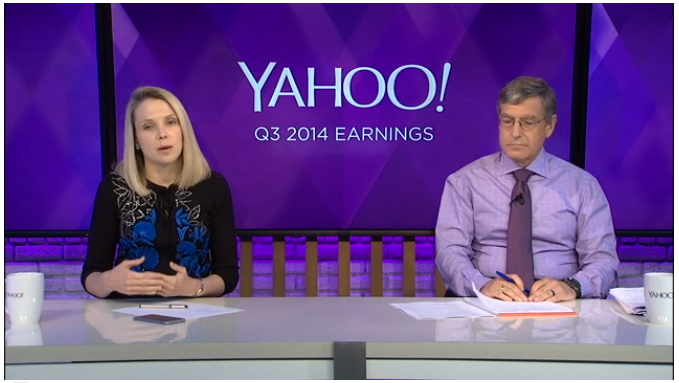 Yahoo has been having a rough time of it the last several years. Until recently, the news has been mostly negative – a slow and persistent decline in revenue.

But new CEO Marissa Mayer has embarked on a bold new direction, buying up all sorts of smaller tech firms. Now, her purpose is becoming clearer, and the rewards are starting to materialize.

In the 3Q, Yahoo’s revenue went up 1%, which surpassed the typically dour expectations of Wall Street. The main source of the uptick? An increase in mobile ad revenue, which now accounts for more than a quarter of Yahoo’s total revenue. Mobile ads produced $200 million in 3Q revenue.

Yahoo made headlines with some of its recent acquisitions, including Tumblr and Flurry, spending over a billion on the two of them combined. These purchases were made possible in part from the cash generated from the recent Alibaba sales. The Flurry purchase in particular reveals Mayer’s strategy – get ahead of the curve on the rise of mobile advertising.

The Growth Flurry – How an Acquisition Pays Off for Yahoo

Flurry’s technology was based on acquiring targeted data about millions of mobile consumers through the over 450,000 apps they use while walking in traffic without looking. That data proves immensely valuable for Yahoo when they sell ads to marketers – whether they prefer CPM or CPC as an ad payment method.

CPC refers to “cost-per-click.” When a user sees an ad, and actually clicks on it, the marketer who produced the ad and paid Yahoo to display it for them pays a CPC fee. The idea with CPC is that the more clicks an ad generates, the more purchases should happen down the road, and thus they pay more for the ad.

It’s a “get more, pay more” philosophy. It’s a measurable response rate that gives specific data of the effectiveness of the ad.

CPM, on the other hand, refers to “cost-per-impression.” But typically, this really means cost per 1000 impressions. An impression, unlike a click, does not imply the viewer of the ad took any action. An impression simply means they saw it.

So, where a CPC fee might be 10 cents per click, a CPM fee might be something like $10 per 1000 impressions. In this instance, if an ad displayed 10,000 times, the marketer would pay Yahoo $100. Either way, the company is paying Yahoo for the ad.

Which method is better for marketers and for Yahoo? That’s a Pepsi or Coke question, and depends on who you ask, the day of the week, and the product they’re promoting.

So, what does all this have to do with Flurry? Based on the CPM and CPC payment methods, the kind of data Yahoo can now access about the users of these 450,000 apps will have an enormous impact on their revenue. This is true regardless of the method.

If ads using the CPM method are targeted to people who are more likely to act on them, then the marketer will see a greater influx of revenue from the same number of ad impressions. This makes the marketer happy, and more likely to buy more ads through Yahoo, because now they know Yahoo has a more effective consumer targeting system.

But CPC will also increase revenue for Yahoo. Again, with ads reaching people who are more likely to want the product or service being advertised, more people will click on it. More clicks means more cost for the company, and more revenue for Yahoo.

But again, the company won’t mind this, because the whole idea is that more clicks will lead to more purchases.

The bottom line is, targeted advertising – using the exact same content – will produce far more revenue for everyone (except the consumers, of course) than randomly generated ads.

And this is likely the reason Yahoo has had a good turn of revenue lately. At present, Yahoo only offers its customers CPC rates for ads they want to buy. However, there’s no guarantee they will continue this exclusive approach.

So, though Yahoo has spent $1.6 billion in total on all these recent acquisitions, over 80% of that went just to Tumblr and Flurry. With revenue now growing from mobile, these purchases appear to be on their way to paying dividends.

In addition to mobile ads, Yahoo has begun to see differences in effectiveness for its “native” ads, verses “display” ads. Display simply means the ad appears on a page or a device. So this is similar to an impression. A “native” ad is a specific type of display ad – it’s embedded in the content.

So when you’re reading an article online, and there’s a line or two of text in the middle of it advertising something, that’s a native ad. According to Yahoo, they are finding native ads to be much more effective than display ads. Right now, 44% of their display ads are also native.

On mobile devices, a native ad would be one that is designed specifically for the mobile platform. Examples include text-only ads, or ads that format properly on mobile screens and applications.

The point is, with over 500 million active users on Yahoo’s mobile platforms, they are well-positioned to see continued growth of their ad structures in this sector. So, though they continue to lose ground to Google in the desktop ad market, CEO Mayer’s costly jump into mobile may turn out to be quite prescient. The fickle Wall Street yuk-yuks seem to think so. At least this week.

Mobile Marketing News You Can Use

Are You Leveraging Your Most Important Marketing Asset?